Planning program for Brommaplan, in English

The city has developed a planning program for how the central parts of Bromma, with the areas Riksby, Åkeshov and Åkeslund, can be developed with 3000-4000 new housings. In addition to housing the vision also propose areas for commerce, development of kindergartens and schools, sports and recreational functions and improved parks and green areas.

The purpose of the planning program is to describe how Brommaplan can develop into a strategic node according to Stockholm's City Plan. The short distance to central Stockholm and several expansive parts of the Stockholm region as Kista, Solna and Sundbyberg makes the central parts of Bromma to an attractive residential area and a good location for businesses. This creates opportunities to develop the central parts of Bromma to an attractive, versatile and sustainable urban environment with Brommaplan as the center of commercial and public services, and a node for public transport. 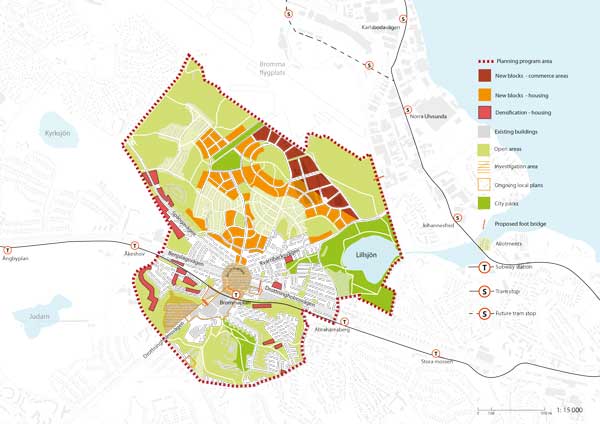 The planning program has been divided into three urban development areas where each area has different conditions and development opportunities:

The planning program was for consultation during the period 22 February to 4 April 2016. During that time there was an opportunity to submit comments on the vision.

In march 2017 all written comments compiled will be presented to the City Planning Committee, who will decide the project's continued focus.