Till navigationen Till huvudinnehållet
Start / Områden / Hagastaden / In English Hagastaden

Hagastaden is one of Stockholm’s largest urban development areas with 6,000 new homes and 50,000 workplaces.

Hagastaden is one of Stockholm's largest and most important urban development projects. By 2030, the area of Norra Station between the city of Stockholm and Solna, will be built and developed into an entirely new neighbourhood with a mixture of apartments, workplaces, cultural attractions, green areas, world-leading research and highly specialized medical care.

The City of Stockholm singled out the area as an urban development project in the early 2000s. At the same time, the medical university, Karolinska Institutet, was developing an idea that involved creating a center for bio scientific research in an attractive environment. This prompted the cities of Stockholm and Solna to jointly invest in a new area – Hagastaden. It is being integrated with the New Karolinska Solna University Hospital, a completely new university hospital which opened 2016 to meet future demands for medical care and research.

By placing segments of the European highway E4/E20 and the Värtabanan railway in tunnels, the landscape can be developed and thus transformed into a vibrant area that will serve as home and workplace to thousands of people. Just over 3000 apartments are being built on the Stockholm side, and there will be around 14 000 new workplaces as well as central area with restaurants and cafés.

Stockholm needs to grow and Hagastaden is an important aspect of the city's implementation of Vision 2030, including fundamental ideas for an innovative versatile and growing region. Stockholm will also serve as the hub in an accessible and secure region without social and physical barriers. 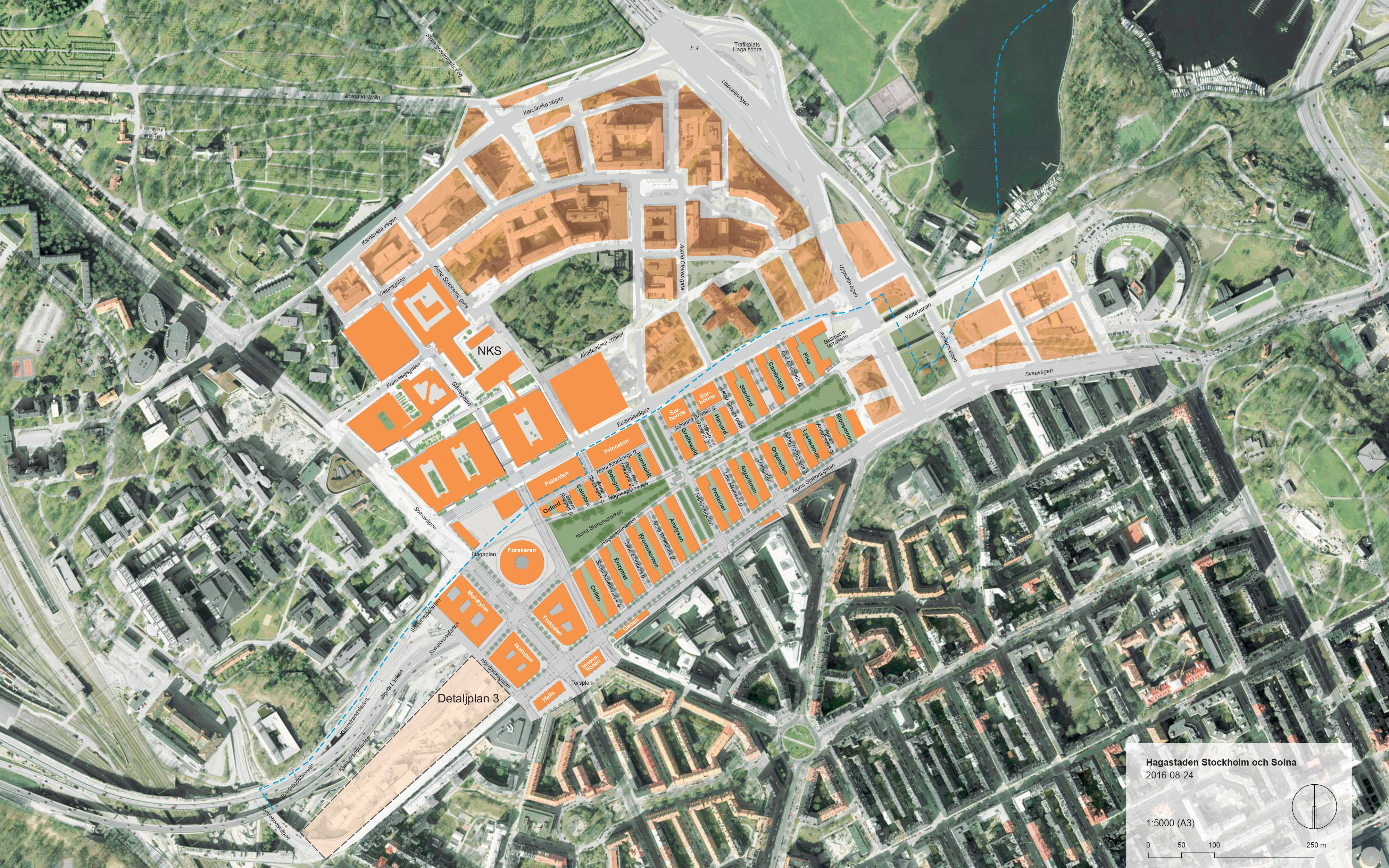 The area of Norra Station is where the neighbourhood Vasastaden ends and where the cities of Stockholm and Solna meet. The municipal boarder is located just north of the customs buildings from 1733 in Norrtull. They will gain new importance as the symbolic entryway into Hagastaden.

Today, the Värtabanan railway and the European highway E4/E20 pass through the industrial area of Norra Station. Värtabanan has transported goods from the port of Värtahamnen since 1882. By placing segments of the railway and highway in tunnels, the landscape on top of the tunnel roofs can be transformed into a vibrant area of new homes and workplaces.

The area is also connected to one of Sweden's most visited recreational areas, the Haga Park (Hagaparken), a part of the Royal National City Park, hosting both popular attractions and world class knowledge institutions. The area is protected by a unique legislation that strictly regulates all its new developments.

*The number of apartments and workplaces refer to the whole area, including Solna.

The planning of the second detailed development plan area will start within the coming years. The actual realisation of the plan can start no earlier than 2022 when the plan has been approved by the City council.

The planning of the third detailed development plan area will also start within the coming years. The earliest realisation of the plan is estimated to 2024.

2013
New bridge in Solna operational and temporary bridge torn down.

2015
Start of construction on the residential neighbourhood north of Norra Stationsgatan.

2017
Start of construction to enclose the railway in tunnels.

Who is responsible for what?

The City of Stockholm is responsible for planning and implementing Stockholm's portion of the project.
stockholm.se/hagastaden

The City of Solna has, together with the City of Stockholm, produced a detailed layout plan for the common area.
solna.se

The Swedish Transport Administration (Trafikverket) is responsible for managing the national roads and the railway, now running in tunnels through Hagastaden.
trafikverket.se

Akademiska hus is developing Campus Solna with a third building within Karolinska Institutet Science Park, known as Folkhälsohuset, as well as a large assembly hall.
akademiskahus.se

Locum is responsible for hospital property east of the New Karolinska Solna University Hospital and for developing the hospital area after 2017.
locum.se

Karolinska Institutet a leading medical university, is expanding. One of the world's largest laboratories will be completed in 2016, and a new assembly hall is under construction.
ki.se

Hagastaden – a Science City for Life and Health

Hagastaden – a Science City for Life and Health

In and around Hagastaden there is a great concentration of research and enterprise in the life sciences, a collective term for the branches of science aimed at improving health and well-being. Here, world-leading education and research are conducted at Karolinska Institutet, KTH Royal Institute of Technology, Stockholm University and Karolinska University Hospital.

Gå till "Hagastaden – a Science City for Life and Health"

Residential quarters in some parts of the area will be given a denser, elevated and varied urban structure than is otherwise the case in Stockholm. All ground-floor levels will be open and will house shops, restaurants and cafés.

Tunnelling and coverage of the road network

A prerequisite for the construction of Hagastaden is that parts of the road network are tunnelled and reinforced, so that the new city district can be built on top.

Gå till "Tunnelling and coverage of the road network"

Getting to and from Hagastaden will be easy. Hagastaden is being planned to enable the best possible alternatives for pedestrians, cyclists and local transit.

Parks and green spaces in Hagastaden and vicinity

A park will be built in the middle of Hagastaden starting in 2021. Running through the northern part of the inner city, the oblong, hourglass-shaped park will border Torsplan and Hagaplan on the west side and extend to Norrtull to the east.

Gå till "Parks and green spaces in Hagastaden and vicinity"

A distinctive environmental feature of the Hagastaden project is that centrally located and underutilised land will be developed for housing and business premises.

Taking its point of departure in life sciences, with the theme overall vision for public art in Hagastaden is to create multifaceted works of art at many levels.

Gå till "Art in Hagastaden"